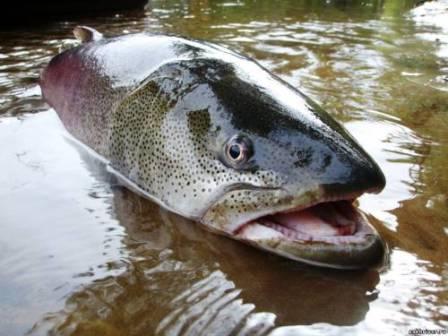 The name Hucho perryi has for a long time got accustomed, some use it still. On the basis of some morphological and osteological features and essential differences in ecology (a settled and way of life anadromous) V.D. Vladykov in 1963 has carried the Sakhalin taimen to the sugenus Parahucho that is confirmed with morphological researches and some time was considered as conventional. The most important signs distinguishing ST from close species of H. hucho and H. taimen is larger scales and weaker soshnik.

Thus, the Sakhalin taimen it is possible to consider the only representative of the monotypical genus Parahucho, in case of his disappearance we will lose not subspecies or species, but the whole genus!

Many comparative data confirm closer relationship of the Sakhalin taimen with the Pacific salmon of the genus Oncorhynchus and the Pacific noble salmons of the genus Parasalmo. On the contrary, with freshwater genus Hucho taymens similarity of anadromous taimen, most likely, purely external is also connected with features of ecology of these largest predatory fishes.