One more paper about taimen 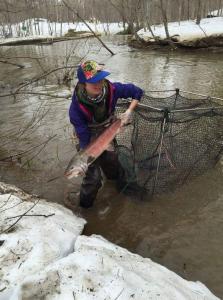 The authoritative journal Environ Biol Fish published a large article by Michio Fukushima and Peter Rand High rates of conservative spawning and precision homing in Sakhalin taimen (Parahucho perryi). High-tech techniques and statistical data processing cause legitimate envy among Russian specialists. But in Hokkaido there are only a dozen rivers with stable populations of the species. In fairness  Peter was looking for an opportunity to come to work in Sakhalin.

The article describes work on the Karibetsu River, a tributary of Sarufutsu  where 335-425 taimen individuals go to spawn every spring (Rand, Fukushima, 2014). Most of these fish spawn in a system of streams in the upper reaches of  Karibetsu . Fish were caught in the main channel (point L on the map), in a spillway  5 meters wide, they were measured and a PIT tag was hung. Here and on four streams upstream, antennas were installed  fixing each passing fish with a PIT tag. 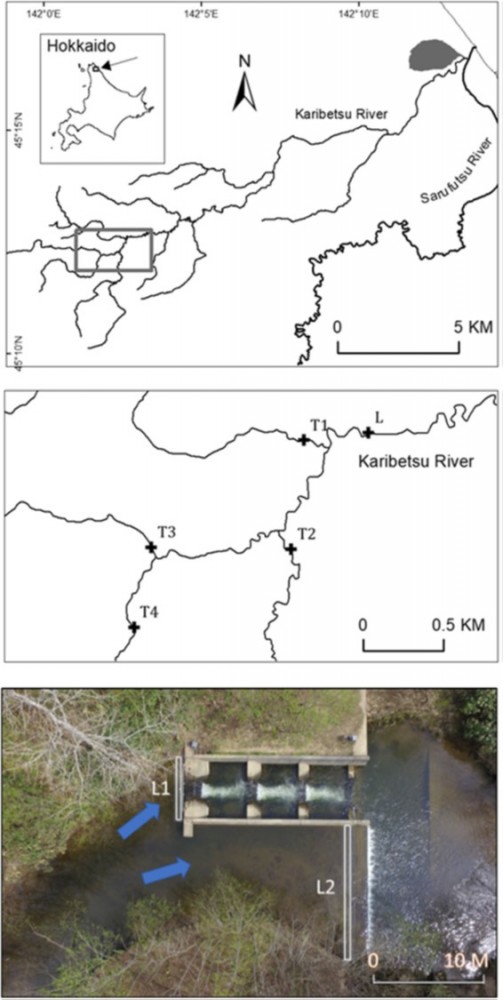 For four spring seasons 2016-2019 it was possible to establish the following. It turns out that about 70% of individuals spawn sequentially, without a skip. These are more large individuals and females. The degree of homing is calculated, that is, return to streams of  origin - from 50 to 87%. All these parameters are record for all other salmonids with repeated spawning. The hypothesis of what an olfactory imprinting  is characteristic not only of juveniles of fish, but also of adult fish is made.

And finally two paragraphs are devoted to the problems of conservation  the species  in connection with the discovered facts. Firstly, it is necessary to restore connection  between the habitats (remove dams, culverts, etc.). Second, high homing is known to limit the ability of endangered local populations to recover from neighboring more resistant ones.