Death of Ito in Hokkaido 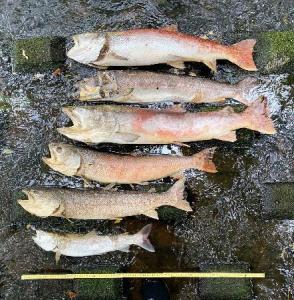 Many dead bodies of the endangered large fish Ito, also known as "phantom fish," have been found in rivers in the Soya region of northern Hokkaido this summer. According to experts, it is highly possible that oxygen deficiency occurred due to the record heat rise in water temperature and the drought caused by lack of rain. Local conservation groups are also calling for refraining from fishing until the river level returns to normal, and are on the .

Mitsuru Kawahara (51) of the "Sarufutsu Ito no Kai", who is engaged in conservation activities, has found a total of about 40 carcasses in the Sarufutsu River system in Sarufutsu Village since early August. There is a rotting odor in the river, and bones after being eaten by animals are scattered around. I found a living individual, but recalled, "Some fish were weak and hit the shore just because they were floating."

They wonder if similar deaths of Sakhalin taimen have occurred in Russian rivers as well.