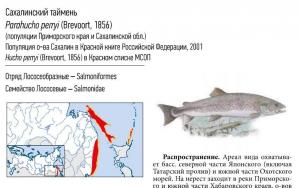 One of the latest versions of the Red Book of Russian Federation, Animals, became available. Pages 330-334 are dedicated to the Siberian and Sakhalin taimens. The authors of the texts Siberian Taimen (populations of the European part of Russia; Western Siberia (with the exception of Rep. Altai and the Tom River within the boundaries of Kemerovo region); basin of Angara River, including basin of Lake Baikal; Sakhalin) - N. I. Shilin, V. D. Bogdanov; Sakhalin Taimen (populations of Primorsky Krai and Sakhalin Region) - N. I. Shilin.