Correspondence with Sakhalin Agency on tourism 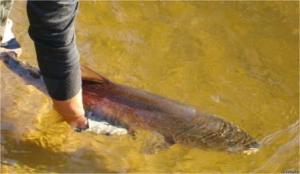 "Attracts attention that many natural objects which it is possible to call "live legends of islands" very poorly are untwisted for the purpose of involvement of tourists and also in the nature protection purposes. This is, for example, a Sakhalin sturgeon, a fish eagle owl, a green pigeon, many other unique species of an animal and flora.

But the Sakhalin taimen - a flag species, the tsar fish, a river tiger, the leader of all salmon family, a symbol of preservation of all water ecosystems is especially worthy honor and respect. It is an indisputable brand of the Sakhalin region, and we, being in the center of an area of this unique look, we bear global responsibility for his preservation. Now we with group of experts are busy with drawing up the Regional program for preservation of the Sakhalin taimen, and work with target groups on which his destiny depends will be her major element. Including with travel agencies and tour operators for whom special tours and programs will be developed. If it is interesting to you, we are ready to present more detailed vision of these projects".

The answer is received: "Of course, it is interesting to us. At the moment we with fishery agency have started the program for the organization and advance of fishing tourism. We will be glad if you are able to develop professional programs which will be interesting to tourists".

"With your permission, I will a little be presented. I am the field ichthyologist with a long standing who is at the same time working on different public projects. Some time ago we with the wife conducted field tours "Salmon Watch" (more than 80) and Salmon Festivals (9). Saw that it can be done an interesting tourist's product, but waited when the Sakhalin Salmon Park is started. Unfortunately, the visit center of the Park costs unfinished (at "Sakhalin Artek"), the eco-trail on the river bank was made, financing of the project the Sakhalin Salmon Initiative is finished.

Of course, I was in several as we called them, fishing and ecological expeditions. Well I know that at the correct respect for the principle "Caught-release" and the organizations of protection of a resource it can become steady business. But under our conditions respect for all norms and rules looks slyness as nearby now on any small river the mass of networks and poachers. To fight against it, especially concerning not trade valuable types (taimen, masu, coho, in the north – grayling, lenok) nobody can and wants, and first of all fishery Agency with the "available fish" and "6-mile zone". If you need real experience, can offer Mikhail Skopets's consultations, Mariusz Wroblevsky, Peter Rand, Dmitry Nazarov and other experts who well know a situation with fishing tourism in the country and the world.

Peter Rand, the head of group on salmon of IUCN, spring of 2018 going to visit Sakhalin for search of spawning areas of Sakhalin taimen, same the group of ichthyologists of SahGU and SakhNIRO will be engaged. In these and other scientific expeditions as it is represented to me, it is possible to invite fans of tourism with special interests. Also there can be demanded a release of fingerling of ST from the Okhotsk LRZ, usually in July to the rivers of the basin of Tunaicha lake .

Other direction of ecotourism – Fishwatching – isn't untwisted at all and even technically isn't worked out yet. It would be interesting to me to be engaged in it if it is really necessary for someone. But at us there isn't a lot of foreigners, and it is simpler to entice the domestic tourist fish delicacies, binge and a karaoke, than observations of wildlife with a nature protection bias.

Having returned to fishing tourism, we find out that the most interesting species – Sakhalin taimen – can't be untwisted as object of this business as formally he is protected by the Red List of Russian Federation, and "Caught-release" the principle at us legislatively it isn't registered. On the Kola Peninsula from the 1990th criminal structures help to support steady use of populations of a salmon, strangely enough. On Kamchatka fishing tourism is developed better, but in general a situation approximately as at us – it is bound with poaching. Nobody manages to bring order to this sphere yet. For example, the Strategy of conservation of the Kamchatka mikizha which is carefully developed under the leadership of the academician D.S. Pavlov isn't accepted because of contradictions of the status of the Red List and fishery even if without withdrawal.

We are convinced that the first that needs to be done – to fight against poaching. And after it to be engaged with other target groups on which survival of species – amateur fishers, fishermen of trade, fishing tourists depends. Strategy has two levels – for all population, and for concrete population, for example, of Nabil'. More effectively to work at the first level, we will try to introduce understanding of value of species in consciousness of people, for this purpose there are special technologies.

The Sakhalin taimen is a "flag" species which representatives from the human point of view have spiritual, esthetic and recreational value. The taimen is offered by a live symbol of preservation salmon the South of the Far East and the environment of their dwelling and also the unique brand of the Sakhalin region, a valuable component of her sustainable development increasing her tourist appeal.