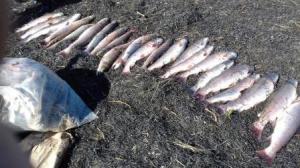 In the middle of June information on the first joint raid on protection of Sakhalin taimen on the Nabilsky gulf has made a noise. The group of FSB of Russia, the RN-Sakhalinmorneftegaz company, protection of the fishing enterprise "NH Kaigang" and public organization "Sakhalin Environment Watch" were involved in this raid.

As recently have reported in Nogliksky office of police, three poachers detained during raid were persons of no fixed abode and are put on the wanted list.