Taimen of the Northwest of Sakhalin 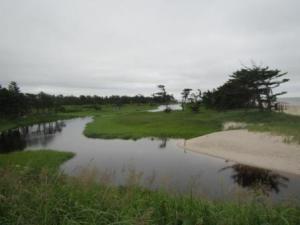 In July, 2017 inventory of the territory of the natural wildlife area "Tundroviy" in the Northwest of Sakhalin was carried out. This wildlife area is located in the remote area, on border of Okhinsky and Aleksandrovsky districts. It was succeeded to get there only with the help of Andrey Vyacheslavovich Yemelin who professionally is engaged in development of tourism in the Aniva and Okhinsky districts. At first on the Langry River, on the lower base LLC Karibu accepted two Japanese who have specially arrived for one day to fishing. Here the security guards employed by LLC Okha for protection of basins of the rivers Bol'shaya, Langry, Chingay and Pyrki accommodated. This protection is very effective, and thanks to it, in these rivers, except trade species of salmons, the high number of pike, grayling, lenok, whitefish and other representatives of the richest fish fauna remains.

Pyrki, Tengi and in headwaters of the Langry River was succeeded to visit also estuarial zones of the rivers Chingay. And everywhere it was possible to fish freely amateur tackles, without coming across illegal nets.

Thanks to proximity of the mouth of Amur from where in brakish estuary feeding migrants are often marked out, the freshwater fish fauna of the Northwest possesses the greatest in limits of Sakhalin a variety of specific structure. In total here also brakish species of fish can be marked out about 120 freshwater. This region has special value because it is the only site of joint dwelling (simpatriya) of two species in the world taymens – Sakhalin and Siberian (Safronov et al., 1998).

According to polling data, the Siberian taimen is not a feeding migrant, and is reproduced in the rivers of the Northwest. It does lawful inclusion of the Sakhalin populations of this species in the next list for new edition of the Red List of the Russian Federation (2016).

The Sakhalin taimen in these rivers meets even less often, but nevertheless is almost universal. Including in this expedition he has been noted in the flowing lake Beregovoe between basins of the Pyrki and Tengi Rivers. So a statement that "to Sakhalin Island meets everywhere except for a northern part (up to 51 °C. highway)" (Shilin, 2001) can consider outdated.