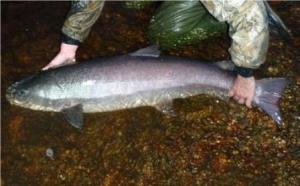 On Sakhalin within 3 years the "Studying of Sakhalin Taimen Population Structure for Development of Preservation Measures of  His Gene Pool" project by group of Institute of the general genetics of N.I. Vavilov (Moscow) under the leadership of Doctor of Biological Science L.A. Zhivotovsky was carried out. A main objective of work was definition of extent of genetic differentiation of populations of the Sakhalin taimen on DNA markers for assessment of their reproductive isolation from each other and development of measures preservation of their gene pool.

In general for the sake of appearances interpopulation a component of a gene variety it was maximum among all salmons – 22,6%. It is considered that at values of a measure of an interpopulation variety higher than 20% exchange of migrants between populations practically doesn't happen. The tragedy of the Sakhalin taimen also consists in it – having disappeared from some population, it any more never independently will be restored.