Taimen of the Ainu lake 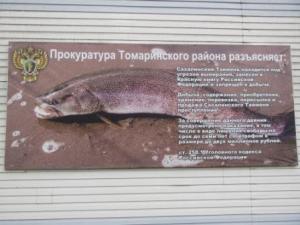 Text of a banner simple and exhaustive:

Sakhalin Taimen is under the threat of extinction, is included in the Red List of the Russian Federation and forbidden to production.

For commission of this act punishment, including in the form of imprisonment for a period of up to seven years with a penalty at the rate to two million rubles is prescribed.

Art. 258.1 of the Criminal Code of the Russian Federation"

It not just prevention, follows from poll of locals that they are afraid to expose nets even on other fish, and caught on rod tools of fishing taimen surely release. And results are - according to numerous fishers, the number of a taimen in the lake for the last 5-6 years has grown.

As the senior state inspector of the Krasnogorsk fish inspection Alexey Batrakov has told, just 6 years ago they have begun to remove and burn without analysis all networks from the lake. The record was - 65 nets a day! But now nobody risks to poach, and the taimen has responded at once.