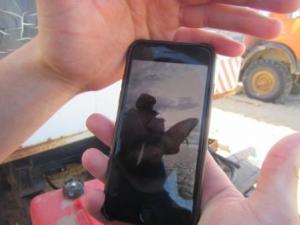 Unfortunately, then there was no time to download a plot, even to learn a name of this decent person. It is known only that it is removed near on September 7, 2017 on a sea seine of LLC Vostok-Nogliki at the northernmost tip of the Gafovich island, that is Sakhalin taimen, most likely, went on a wintering to the Dagi River. By results of numerous polls, in the Nyysky gulf for a long time the taimen almost doesn't come across, as it isn't surprising, considering such pressure of trade, poaching and so-called traditional fishing of indiginous people. We ask the management of LLC Vostok-Nogliki (the company which essentially isn't engaged in buying up of fish from poachers) to learn which of employees released individuals taymens at trade and to award them.