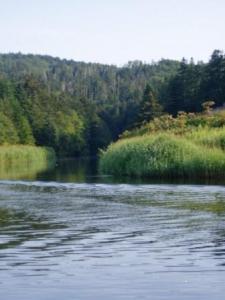 Necessary condition for dwelling of the Sakhalin taimen in this river basin is existence of sites with a small bias, large lakes or estuaries. The main herds of a taimen to Sakhalin Island are dated for the river basins having considerable flat sites (Tym, Poronay), large lakes (Ainu) or extensive estuaries (Nabil', Dagi). Brakish lakes (Tunaicha, Nevsky) and inflows the brakish of sea gulfs, such as Piltun, Lunsky, etc. are favorable for existence of this species. On the Southern Kuriles the taimen is also dated only for a lake lagoon systems and doesn't come into the pink salmon rivers with a considerable bias flowing directly into the sea at all.