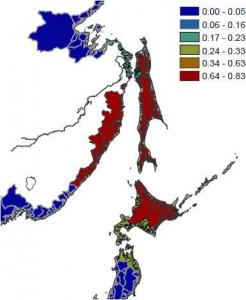 Modeling of historical distribution of the Sakhalin taimen is in detail considered in article published in the Transactions of the American Fisheries Society magazine (Fukushima et al., 2011). Correlations with the average annual air temperature, the area of the basin of the rivers, average height of the basin above sea level, of lowlands lower than 20 m, existence of lagoons, an average amount of precipitation are revealed. The modern area almost coincides with predicted according to model, but in the past could have an appearance wider circulation, especially in his southern areas.