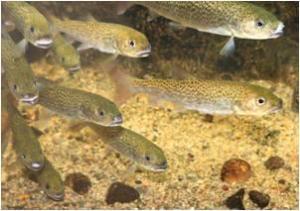 On November 28 in the Small Hall of the Sakhalin region Government 20th meeting of Working expert group on biodiversity at Ecological Council of Sakhalin region has taken place.

The agenda the first point had included a question:

"Development and discussion of structure of the comprehensive program on Sakhalin taimen studying and conservation within the Strategy of  biodiversity conservation of the Sakhalin region".

At first the Sakhalin Taimen Conservation project at the expense of LLC Rosneft-Sakhalinmorneftegaz which has been planned and was carried out according to all standards of conservation biology, and in only one and a half autumn months it have brought notable results. The full report and materials on this project will be submitted a bit later.

The short message of the representative of "Sakhalin Energy" has been directed to assessment of condition of the typical waterway crossed by the route of pipelines and the provision of Sakhalin taimen in his fish fauna.

Unfortunately the report on results of the project on research of Nabil’ River ST population supported by LLC Gazprom Dobycha Shelf wasn't heard.

But the first results of work on creation of two salmon especially protected territories – the wildlife area on the River and Gulf Nabil’ and a nature sanctuary in the lower watercourse of Dagi River have been voiced.

The arriving disturbing signals of condition of Sakhalin taimen populations in the rivers of the Northeast have resulted in need of development of the mentioned comprehensive program on the basis of already available practices and on the platform of the real website. For this purpose the regulations of REG have been changed for creation of section on Sakhalin taimen conservation from its members: S. S. Makeev (Sakhalinrybvod) is the head, D. V. Lisitsyn (Sakhalin Ecological Watch), N. K. Zavarzina (SakhNIRO).

Also the section on protection of marine mammals has been created for what there was a need of inclusion new participants in number of members of REG.

Protokol of 20 meeting of WEG.