6000 eggs of Sakhalin taimen have put at the Okhotsk hatchery 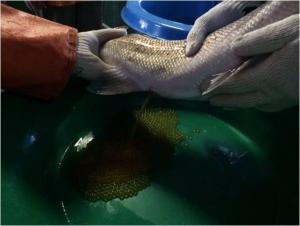 Six thousand eggs of Sakhalin taimen have put on May 16 at the Okhotsk hatchery, reports a news topic  of "Sakhalin" TV company. Before within a month ichthyologists leading by chief ichthyologist Igor Bobrov from Sakhalin branch Federal State Budgetary Institution Glavrybvod have caught 2 females and 11 males of rare fish in the Tunaicha Lake.

Today the enterprise - the only thing in the region who can be engaged in reproduction of this species. Process difficult and laborious as any individual shouldn't suffer. Solution of carnation not only calms  taimen, but also slows down his physiological processes including breath. In addition the head is wound with wet cloth that gills didn't dry. Then experts have several minutes to decant eggs and semen and to return fish to water.

Kirill Proskuryakov: "The species from Red Book, disappearing. He isn't enough. Therefore it is necessary to work with him individually, accurately". To carry out artificial insemination of eggs, individuals of a taimen - one female and three males, have for a while withdrawn from the habitat. The biomaterials extracted from producers right there mix and activate semen by means of water. In three minutes - occupies fertilization process so much, eggs is washed out and choose all defects. Then place her in a special cell.

Yulia Krivosheina: "Larvas will rise on swim in August then feeding process will begin. In a year the grown-up juveniles will be released to the native habitat. To the same rivers where her producers have been caught". It is much more chances to survive at hatchery than in the nature. What allows to increase population of a Red Book taimen annually artificially.

Victor Kiselyov: "Last year we have gathered eggs from one female and in it it was succeeded to catch two females at once. Respectively there will be much more release because of the bigger number of eggs". Today the Okhotsk hatchery only who can be engaged in reproduction of Red Book taimen. The initiative and support of this practice since 2012 belongs to Sakhalinrybvod.

Maxim Myakishev: "Every year it is necessary to get permission to catching. On average we produce up from 1800 to 9000 fingerlings. As a species very rare, it is impossible to catch a large number of females". In several days of adult individuals will release back to the rivers. Afterwards, in June, to the habitat will send the last year's grown-up juveniles. It is about 2,5 thousand copies of a Red Book taimen.