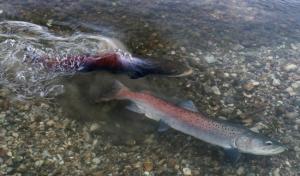 According to Alexander Antonov (VNIRO Sakhalin branch), in the lower watercourse of Dolinka flowing into the Sea of Okhotsk to the north of Ochepukha spawning of the Sakhalin taimen is noted. The large female was observed at night on May 5, obviously, rolling down after spawning in the sea.

The Dolinka River is included into the list of the rivers with populations of ST on category 1 (disappeared or disappearing), pleasant news speaks about revival of population of this river.