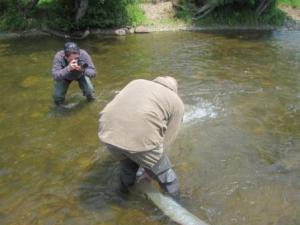 The taimen called "ghost fish" in Japan and popular with Japanese fishermen, is on the verge of extinction in Sakhalin. Here in Sakhalin, in order to preserve the population of the taimen, the reproduction and annual release of fingerlings into the rivers is carried out. Despite the fact that, compared to Hokkaido in Sakhalin, the natural habitat and nutrition for this species is well preserved, the high level of local poaching  does not easily cut out the number of Sakhalin timen. Sakhalin scientists want to cooperate with Hokkaido's colleagues to adopt Japanese experience in preserving the number of taimen.

On the west coast of Sakhalin there is Lake Ainskoe. In the pre-war era the lake was called Raitisi Lake by the Japanese, until now civilization and asphalt roads have not reached this lake. When I went out to the lake on a boat with Park Yong Wang (64), who lives nearby, I caught a few 50 to 70 cm young  taimens. "Here, in wild places far from tourists and cities, pristine nature is well preserved, I hardly notice changes in the environment," - said Mr. Park.

I was fishing on the principle of "catch - release" so the time I had to let go. Taimen is listed in the Red Book and belongs to the second category, that is, the species of fish, the number of which is rapidly decreasing and if not taken, they can move to the category of disappearing. Since 1997, fishing of taimen has been prohibited

According to scientific research, 129 rivers and 20 lakes with taimen in Sakhalin, representing 60 per cent of the total number of Sakhalin rivers and lakes. Sakhalin rivers are a favorable and natural habitat, and are not cut by concrete dams, artificial streams, dams, shore-strengthening structures, as in Japan, where 10 rivers with a stable population of taimen are known Hokkaido is inferior to Sakhalin by the number of rivers

However according to ichthyologist Sergei Makeev (64 years old), who has long been engaged in the development of a strategy for the conservation of Sakhalin taimen, 80% of the Sakhalin rivers are threatened with extinction, and in the rest of the rivers the population decreases by 10-20 percent annually. The main factor contributing to the decline in the population of Sakhalin taimen is mass poaching, with the use of prohibited fishing gear.  Lake Tunaicha, located near the capital of Sakhalin, Yuzhno-Sakhalinsk, is cut by poaching nets

In order to preserve the population of Sakhalin taimen, the Sakhalin branch of Glavrybvod, as well as the private hatchery, taking the initiative of artificial reproduction of the taimen, since 2013 have successfully produced young taimen fingerlings into the Sakhalin rivers. It is said that the technology of taimen reproduction was taken from specialists of the factory of Aomori prefecture, which is engaged in time reproduction. In July 2019, another release of the young Sakhalin taimen took place - 6,000 pieces were released into the Sakhalin River, which flows into Lake Tunaicha. 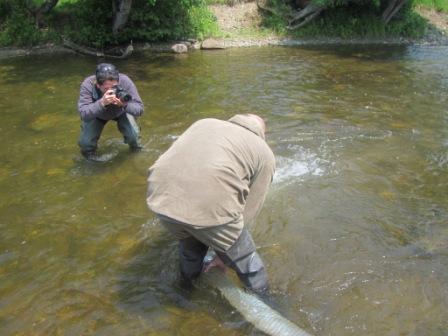 In addition, in order to preserve the number and habitat of the Sakhalin taimen, the catch of taimen is subject to criminal liability and penalties. State bodies have strengthened measures to monitor illegal fishing and protect the environment. Since last year, the fine for damage caused by poaching has increased several times.

At Hokkaido the monitoring of the number and spread of young released taimen, carried out by modern methods, gives high results for the preservation of the number of taimen. "Taimen is the fish that connects Sakhalin and Hokkaido. I would like to exchange the developed data and information with Japanese colleagues on the strategy of  conservation, environmental education and implementation of possible joint projects, Sergey Makeev said in an interview with Hokkaido Simbun.

Taimen is the largest freshwater fish of the salmon family in Japan, some individuals exceed 1 meter in length . Young individuals are considered to be sexually mature when they reach the age of 6-8 years After spawning and hatching, fishes seek food in the lower rivers. In Japan, there are 40 rivers on the islands of Hokkaido and Kyushu in the Tohoku region - the habitats of the taimen, listed in the Red Book of the Ministry of Environment of Japan, as an endangered species. In Japan, with the exception of protected areas, there is no ban on taimen fishing The Japanese adhere to the principle of "catch-release" - this is the most effective approach in combining fishing and keeping taimen.