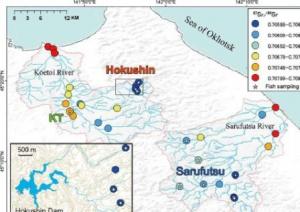 The journal Environmental Biology of Fisheries published new article by Michio Fukushima with co-authors "Anadromy sustained in the articulatively land-locked population of Sakhalin taimen in northern Japan" about the land-locked populations of Sakhalin taimen. The possibility of returning such populations to normal anadromous lifestyle is under discussion. If you remove the dam which built 40-75 years ago, will taimens again go to the sea for feeding?

There are 3 such populations in total in Hokkaido, one dam built on the Koetoi River to create the Hokushin reservoir supplying water to Wakkanai. The dam on this river is arranged so that individuals of taimen can only move downstream, but are unable to overcome the obstacle when moving upward. 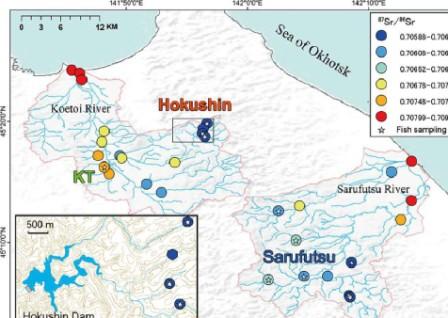 The approaches taken by the authors of the study are very interesting. They measured the ratio of strontium isotopes (87Sr/86Sr) in water samples, otolites of young and adult fish taken in the Koetoi river basin above and below the dam, and in the Sarufutsu control river basin. The isotopic method worked no worse than the long-known method of microchemical otolitometry (by the ratio of Sr/Ca elements). He showed an opportunity to learn from the otolites not only the history of migration of adults, but also the origin of young fishes. It was possible to prove that adult fish rolling from the reservoir returned to an anadromous lifestyle.

Thus, the methods of precision science develop the strategy of population conservation taking into account the life strategy of fish.