Modern species area, the analysis of his changes for the foreseeable period, definition of tendencies of dynamics.

The area of Sakhalin taimenhabitats is rather small, it includes basins  of northern part ofJapan Sea and southern part of Okhotsk Sea. For the long term of evolution the area of species hasn't extended outside borders of the Japan Sea because of features of his biology: from fresh waters taimen prefers to migrate not further estuaries and near mouth of rivers. Water with increased salinity are essential barrier for him. 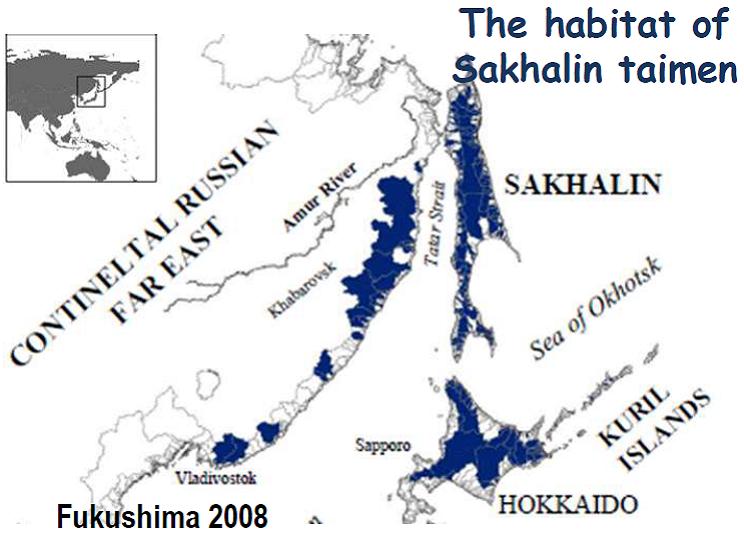 In Japan he has disappeared on the Honshu island and remained only on the Hokkaido island; here a taimen call "fish ghost" as to 57% of river basins it has already practically disappeared (Edo, 2007). Earlier continuous area of this species on the Japan Sea coast of PrimorskyKrai was very significantly reduced – existence of his populations only in 10 rivers is authentically known now. Slightly better a situation in the territory of the southeast of Khabarovsk Krai. Here in Tumninriver, Koppiriver and some other still there are rather numerous populations of a taimen, but also here the situation also constantly worsens.

High rate of narrowing of area of the Sakhalin taimen on the island is noted by many experts. During the numerous field expeditions and polls of experts, amateur fishers and local people preliminary information on occurrence of taimen in river basins is collected. The integrated list contains 129 rivers and about 20 lakes and lagoons on Sakhalin Island. On the islands of Iturup and Kunashir of subpopulation are dated generally for lakes and them 5 and 3 knows respectively.

In these reservoirs at least once for the last 50 years the Sakhalin taimen is noted though in large part it has already disappeared. We conditionally divide subpopulations in the list into two categories according to categories of the Red List of the Russian Federation: 1 – being under the threat of disappearance (or already disappeared), 2 – reduced in number.

It is known that 217 river basins of the island of Sakhalin are subdivided into 6 ecoregions of the IV level (Springmeyer et al., 2007).

Modern abundance of species, analysis of tendencies and rates of her changes (reduction reasons, temporary binding and connection with natural or historical events)

The number and biomass of the Sakhalin taimen always was rather small that is quite natural if to take the ecological niche occupied by this species into account. Therefore he never played an essential role in trade catches. In the 1950-1960th years in Primorye from 48 to 275 c of taimen, and on Sakhalin in the 1970-1980th years – 200-300 c a year were extracted. The general catches in the Far East of the USSR at that time made about 450-500 c a year. The trade weight of a taimen of 5-6 kg though individuals up to 30 kg met, that is about 10 thousand pieces were annually withdrawn. After giving to a taimen of the status of especially protected species information on catches and bycathes of ST became remote.

In 2005 after long warming (the dry and shallow period) the cold snap, i.e. the damp and period abounding in water has begun again (Zolotukhin, the pers. message). According to numerous messages, the number of chum salmon, masu, others salmon, including catch and bycatch of Sakhalin taimen has unexpectedly begun to increase. However natural fluctuations of number only mask steady and her continuous decrease.

The main method which was used for studying of distribution and number of species on Sakhalin are round-ups of suitable station a fine-meshed seine. At the same time fingerlings as the senior juveniles well take refuge in stones and snags were caught generally. Certainly, for a protected species perhaps only his short-term withdrawal from the environment, and at the same time it is necessary to observe the maximum care.

Carrying out round-ups in the monitoring mode, during the same seasons on one of same sites, it is possible to notice a tendency of change of abundance of congestions of juveniles at a stage of feeding on shallow sites. According to A.Yu.Semenchenko and S.F. Zolotukhin (2011) the speed of falling of number of a taimen in the rivers of Sakhalin of category 2 is about 15-20% a year.

To Hokkaido the method of accounting of spawners at the time of spawning or account on spawning redds was often applied. But in the Russian part of an area of a spawning area during spawning are remote, and it is necessary to apply indirect methods.

There are also estimates of number of separate local populations. In some rivers of category 1 taimen has already disappeared, in many rivers  meets very seldom or is single. Sometimes casual  single spawning in the small river gives rather high number of juveniles which comes to naught  then. Possibly, such splashes were observed on the river Tum’ (Nikitin, 2012), Lomzha - Lazovaya's tributory (Korneev, the pers. message), rivers of the Aniva Bay Olkhovatka and Pochinka (Makeev, pers. message).

From the populations constantly subject to overexploitation, too many individuals are withdrawn, and eventually population has enough to extinction. The limited number of individuals in the absence of continuous contacts with each other can't support reproduction of population.